Having not posted here in forever and wanting something more official, I have decided to make a Wordpress blog.

See you over there! http://lovemotionstory.wordpress.com/

Is everything perfect? Well, it never is. But it's always better than it has been, which is the most I will ever hope for and what I am entirely grateful for.

Here is the list of things I have been working on:

- I founded a zine collective, Stumptown Underground, and we're publishing monthly anothologies of writing, comics, illustrations, etc. We've actually been doing it monthly. It's killing me and keeping me alive, both at the same time. Working on it has been totally fucking inspiring. I am seeing the best of all creative people I know and I can't help but be forced to remember how beautiful life is.

- Planning for PZS is already going on and I am organizing again.

- I started an event with Los Moustachios called Movie-A-Roke, which has been a laugh.

Aaaaaaaaaand, I figured I should let you all know about some of the other fabulous events leading up to and during the Portland Zine Symposium...

Shuffleupagus - A Collaborative Zine Experience: At the Central Library on Tuesday, July 21 </li>


In other news, Jeff's visit to Portland was pretty rad. My housemate, Ashley, let Jeff use his bike while he was here, so we biked all around, got some work on comics done (not as much as we should have, apparently we get more done separated), ate a lot of yummy food, and majorly celebrated Canada Day (with poutine from Potato Champion, pies from Whiffies, and karaoke). When he first got here, I still have to nanny for a few days, but then the family went on vacation, which freed up my time.

Jeff left Saturday morning and I spent the 4th of July with my neighbor friends (one who I've started seeing, Dan) and neighbor Dan and I biked to the Steel Bridge to watch fireworks in addition to bbqing and fire blowing.

Today is my last day off from nannying and the past few days I have gotten tons and tons of PZS work done, which is a relief, but not so much work done on comics..

I am feeling like life is moving too fast, there's too much that I want to do, all the time.

Also, Jeff and I have still been posting "Portland LOVES Vancouver" which you can keep up to date on flickr or facebook (at 3 updates, we felt it was fair to give it a facebook fanpage), ( Collapse )

The Zombie Cycle Outbreak ride during Pedalpalooza was a lot of fun (I even tape a loudspeaker to my bike rack and moaned brains as we were riding from bar to bar), I didn't take any pictures (too busy being the leader), but I am sure there are some somewhere on the internet.. Let me know if you find them.

Tonight, Jeff is coming in from Canada tonight and staying until Saturday morning and I am terribly happy about it. A solid week of nurturing hangout time, comics, and awesome. If any of you want to go grab coffee/dinner/etc. with us to meet him, just let me know.


Yesterday, I breifly checked out MCBF (I have been to it enough years that I no longer feel the need to be there the whole time) and made sure to catch the Unicycle Bastards doing their unijousting, which was awesome. I really need to practice unicycling more so that I can join those guys on the unipolo court soon, they're a lot of fun to hang out with.

Right now I am at Tiny's in SE having a work date with BFF Kevin, BFF John, and Dave, working on some lettering..

Oh, did I mention I am leading/planning the zombie ride during Pedalpalooza? Because I totally am. If you want to help me shepherd the hoard, be in on the route, or have pub/bar suggestions, shoot me an email.

Also, here's the Facebook event for Zombie Cycle Outbreak if you want to help get the word out. Really though, there were at least 100 people when I helped organize it last year, so I imagine we'll have plenty of people..

A comic that I wrote, Jeff Ellis drew, and I lettered!

Hopefully, I will have a fancy banner done for the next one, they will be posted weekly, and will be about things involving both Jeff and I. Since I decided I'd like to be lettering this most the time, I am trying to make a cool title banner with fancy font that represents both our cities, something with roses, dogwood flowers, a Portland bridge, Science World, etc. Jeff and I are also working on some other things, which is terribly exciting.

In other news, Jesse is back from India and we sorted out a compromise so that I can go to Olympia Comics Fest and his coming home party. It means I may miss the evening events at Olympia Comics Fest, but at least I am still going to represent PZS and sell some Cloudscape comics and buttons.

Also, I have a few days off in the beginning of July, so I am going to fly up to Vancouver to hang out with Jeff for about a week!

I still haven't written anything in my word bubble tattoo (which I've had for over a month, so it's time to get touched up)... Here are the responses from the last poll, so get to votin'!

Open to: All, detailed results viewable to: All. Participants: 24

Of the submissions, which do you think should be the first to go on my word bubble tattoo?

In other news, a very cute, comics makin' Canadian came down to go to Zombie Prom (we're the couple slow dancing in the first photo in that article!) with me and has been terribly encouraging towards me about all things comics and collaborating... Which, after a lousy and unexpected break up in November, has been just what I need. I mean, if I was nervous about collaborating before, you can only imagine how getting unexpectedly dumped by someone I (used to) respect (and was having a really fun relationship with) for not collaborating only increased any nervous feelings I had about collaborating... But even with the increased nervousness, The Canadian (Also known as Jeff) is communicative and sweet enough to push me in the right direction. Jeff was here for almost four days and my housemate (Ashley, who is way nicer and laid back than my previous housemate) loaned Jeff his bike, so he and I got to bike around Portland a bit. Our adventures revolved mainly around eating out, helping a few of my friends with zombie makeup before zombie prom, and karaoke. Jeff also took it upon himself to assemble my drawing table (recently purchased at Ikea with Dave and Shads) on a lazier day when we were hanging out at my house and I was answering a fuck ton of Portland Zine Symposium emails. Since then, I assembled the cushy chair I got to go with it and I now have a nice creative workspace going on in my room... Jeff plans to be back down in Portland for PZS, too.

Another cool thing Jeff assembled for me was a mini comic to go with a mix cd he brought me.. It's basically full of little, tall tales about me. Here is a couple fun images from it.. 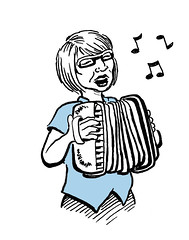 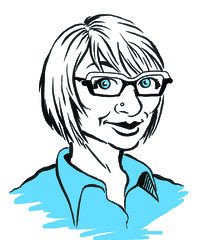 Speaking of really supportive, sweet people, in only a few short days, a very dear friend and romantic entanglement is returning from traveling in India, Jesse. I am terribly excited to have him around again and look forward to all this camping he's claiming to want to do once her returns..

I am really enjoying life right now. New house is working out really well (we're looking to fill a room at the beginning of June, by the way), I have more than one fulfilling, deep romantic relationship going on (and I used to think one was impossible, In just over a week I will be going up to Olympia for Olympia Comics Festival with Katy Ellis O'Brien (are any of you going?), and I am excited to nanny by bike all summer and teach comics workshops.

Wow, I haven't posted in forever. Yikes. I also hardly ever check Livejournal friends' posts either, but I am thinking I should get back into it a bit more. Between Facebook and Twitter, Livejournal has been lost in the shuffle, but I am looking to rekindle the romance..

Here is the last few months in summary for those not friends with me elsewhere on TEH INTARWEBS:

- I moved into a new house, still in NE, of course.
- The family I work for now has a Madsen bucket bike* in their garage, it's going to make this summer of nannying absolutely amazing.
- I am closer than ever to understanding what my heart needs/wants (and it's really complicated) thanks to completely indulging the idea that I will not enter into a monogamous relationship anytime soon.
- I got to moderate the Portfolio Review table at SCF again this year and I hear I did a really good job.
- I am still one of the organizers of PZS and all the flooding of emails for it is kind of driving me crazy, I keep chanting to myself, "This is totally worth it, all this work is totally worth it."
- I go out too much, I need a muse to keep me home more often, working on my personal, creative projects, ugh. Or, you know, maybe some ability to say no to social invitations.
- I got a new tattoo, ON THE PALM OF MY HAND. It's a word bubble that I got as a group tattoo with Neil and Shads, it was Neil's idea.. I have yet to write any text in the word bubble, which leads me to this poll..

Open to: All, detailed results viewable to: All. Participants: 12

What is your submission for my word bubble's first words?

I may copy and paste all submissions and have a vote in another poll or I may just pick my favorite. 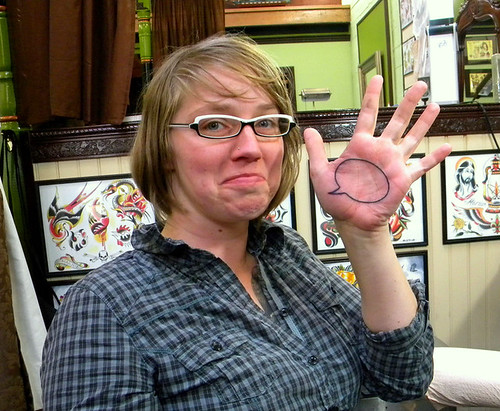 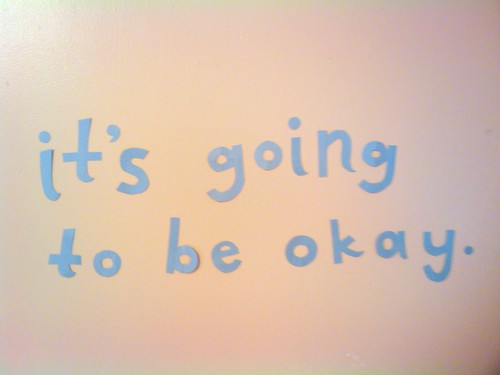 Letters I put up on the wall above my bed a couple weeks ago, during my ongoing, room organizing process.. They're just cut from blue paper and taped on the back.

I am kind of a dork in this way, I like to hang up motivational things around my room. It's a habit I picked up from my best friend in junior high, Jane Nevins. She was also the first girl I ever had strong feelings for. She was an amazing lady.

A lot of days I need to be reminded of this... As I wake up and reach for someone who is long gone, as I come home after a hard day, as I fall asleep with my mind racing as to which problems need what solutions..
Collapse